Zombie animals are found in both Dead Rising: Chop Till You Drop and in advertisements for Dead Rising 2.

Dead Rising: Chop Till You Drop[]

There are two kinds of zombie animals in Willamette Parkview Mall

Fortune City advertises a zombie zoo, which shows zombie penguins, but there are no zombie animals in the game and no zoo.[1] The CURE site argues against this zoo, Rating it Number 4 in its list of Worst Offenders.: 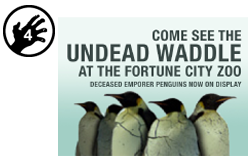 The Zombie aphasia or virus as it turns out, isn’t limited to the human population. When the Fortune City Zoo decided to stop euthanizing infected animals and start putting them on display for money, they crossed a weird line.[2]

Zombie animals only appear in person in Dead Rising Chop Till You Drop for the Nintendo Wii.