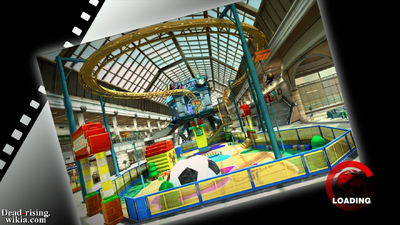 Wonderland Plaza is a Willamette Parkview Mall plaza in Dead Rising. The plaza has an amusement park theme, complete with a large roller coaster called the Space Rider, a children's playland, and two large bunny balloons. It is connected to the Food Court and the North Plaza. There is a secret vent to Entrance Plaza opened up by Greg Simpson during the scoop Out of Control.

HDTVs on the north end of Wonderland Plaza, near the entrance to North Plaza, with a hidden orange juice behind them.

Wonderland Plaza at night as seen from Leisure Park.

HDTVs on the north end of Wonderland Plaza

See also Space Rider for more pictures of the playland.

Sally Mills and Nick Evans hanging of an inflatable bunny in the Wonderland Plaza.

Advertisements along the escalator on the Food Court side.