Picking up the cart[]

The Weapon cart and shopping cart can be picked up three ways:

Frank West can kick the cart by pressing

while he is pushing or holding onto the cart.

Frank getting hit by psychopath Steven

Where the cart respawns/regenerates in Seon's after Frank defeats Steven.

Close up of cart

Steven aiming his gun behind the weapons cart. 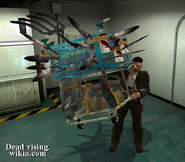