The Hatchet Man is a Dead Rising scoop. On the morning of day 2, Otis calls Frank about a "dude carryin' a machete". When Frank arrives in Crislip's Home Saloon he enters a hellish nightmare.

There are slabs of headless human bodies hanging from the ceiling. Cliff Hudson, a muscled, Machete-wielding man appears, covered in blood from his victims, seems he is having a post 'Nam flashback and believes Frank is the enemy.[2]

He often sneaks up on Frank from behind and impales Frank with his Machete.

Cliff also drops flares and pipe bombs from on top of the shelves. The flares make Frank cough and stagger. Only being a far distance from Cliff or being on top of a shelf will save Frank from these pipe bombs.

As soon as the cutscene is over, Cliff will run up behind Frank and try to slash him with his machete, run forward to avoid this first strike. Then turn and hit cliff with Frank's strongest melee weapon for a few strikes, then run away before Cliff can retaliate with his Machete. Any melee attack will stun Cliff, but do not hit him more than once or he will assuredly strike back at Frank. Never try to hit Cliff immediately after getting up from one of his attack or he will try to knock Frank down a second time.[4]

Effective melee weapons are the Katana found in Ripper's Blades down the hallway, and the Battle Axe. The best melee weapons is again the Small Chainsaw.

The normal chainsaw found in the store can be beneficial in defeating Cliff, but make sure that Frank starts it up while there is some distance between himself and Cliff. Only use running attacks with the chainsaw. 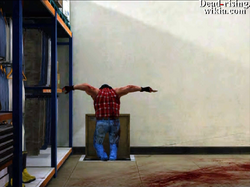 After Frank hits Cliff a few times, he will run to one of the access tunnel passages in the floor. The yellow Prestige Point icon appears over Cliff's head, indicating a photograph opportunity.[7]

Cliff will reappear on top of the shelves. He's immobile while he stands on the shelves, so he won't be able to move around for a better angle on Frank. Use the stacked boxes at the end of a shelf to climb up and scan the area above to locate him. Switch to a firearm and start shooting. When Frank jumps on the staked boxes, Cliff will jump down from the shelves and head for the next access tunnel or jump down and try to attack Frank. Keep shooting. Stay on top of the shelving units for as long as Frank has ammo for his firearms. If Frank runs out of ammo, switch to a close-range weapon, such as a Shotgun, then drop down and sweep the area from below.[6][8]

Shooting Cliff with a shotgun will cause him to drop to one knee and become stunned for a brief moment.[9] Retreat, wait for him to compose himself, and shoot him again. Keep doing this fire and retreat attack for an easy kill. If he gets too close to Frank, run away. If Frank keeps running Cliff will stop to attack which should give Frank enough distance to shoot him with the shotgun.

The best way to get Cliff to come to Frank is to stand next to the many shopping carts near the entrance. Avoid the projectiles, and Cliff should eventually run to Frank.[4]

Alternatively, exit the store and then coming back in, Cliff will charge you, allowing Frank to get some melee hits.

There is no food in the store, but:

After Cliff is defeated he leaves the Machete which will now re-spawn in this store. He also gives Frank the empty store key to rescue the survivors that are in the room to the right of the hardware store as Frank exits (N128).[10] The room also contains the Survival and Wrestling books.

Zombies immediately appear after Cliff is killed and beginning feeding on his carcass.[7]

Locked door where the Hatchet man's captives are
Captives Barbara, Rich, and Josh