The Machinegun is a weapon in Dead Rising. The Machinegun is used by the special forces that have been sent to clear out the Willamette Parkview Mall. The Machinegun is easily the best firearm in the game, and really one of the better weapons overall. It's magazine contains 150 rounds which is more than any other gun, and it only takes one shot to kill a zombie and roughly 30 rounds to kill one of the Special Forces soldiers. However, Frank shouldn't try to use this weapon against the Special Forces soldiers if Frank is on the same height level as them, as their fire will stun Frank and make it hard for Frank to shoot back.

The easiest way to kill the Special Forces is to use a special move like the Suplex or Face Smasher, as these moves will typically kill them with a single usage. The soldiers can be killed off within seconds and their weapons ready for the pickings.

For example, the Wonderland Plaza Lego building with the sub-machine gun atop it in works well for escaping special forces, as do the tops of the shelves in the Warehouse.

To receive the Perfect Gunner achievement in Overtime Mode, Frank must fire all 150 bullets from a Special Forces machine gun without missing. This achievement is easily done by shooting all 150 of the bullets into a carcass in the meat processing room. 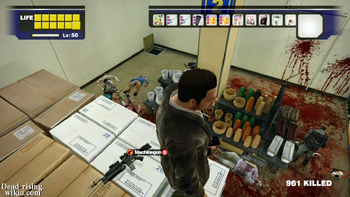