There are 49 saveable survivors in Dead Rising.[Verification needed] Survivors are listed in the order in which they can be saved. To edit a survivor, click "edit this profile".

In addition to the survivors listed above, there are 11 people in the Entrance Plaza before the zombies break in can be photographed and will count towards the Portraiture and Census Taker achievements.

Several other characters, including Brad, Jessie, Dr. Barnaby, Ed DeLuca (the helicopter pilot) and Otis, will also be included in the Survivor count in some game endings.

As Frank progresses, the prestige point amount for each survivor increases. Later survivors are worth 6 times more prestige points than what Jeff and Natalie Meyer give Frank.[7]

Don't lead, follow: Unfortunately, the Dead Rising Artificial Intelligence is terrible. This makes escorting survivors a little frustrating when they continuously get attacked by zombies. Survivors frequently get surrounded by large packs of zombies which they can't handle, leading to their gruesome death, unless you backtrack and try to rescue them, which is not a very good use of Frank's limit time.

To get survivors to join Frank, Frank has to talk to them with (use

), sometimes there are several parts of the conversation, requiring pressing

several times. Leah Stein is a good example of having to repeatedly press the

button. There will then be a large message that the survivor has joined.[8]

will call the survivors to come to Frank.

Use the goal way point command[]

Use the goal command to tell the survivors where to gather, by holding

button on the location you want the survivors to gather, such as a door leading into the next area.

Once at the way point, the survivors will call for Frank repeatedly, which is confusing because survivors also call Frank when they are under attack.[8]

Frank can give certain weapons to survivors, like a lead pipe, shotgun, or small chainsaw. Survivors will not accept big weapons, such as barbells, trash cans, benches, or any two handed weapon that Frank cannot store in his inventory and has to drop to pick something else up.

Frank also can also give food to survivors and they will eat it to regain their health. Survivors who can receive assistance cannot accept weapon items but will accept food to eat. [8]

When a survivor is under attack by a zombie, they will call out your name repeatedly until Frank comes to help them. Be careful when using weapons to rescue survivors, as it is very easy to hit the survivor.

Survivors left behind in another load screen area will have their name on the lower left area of the screen. Their health will slowly deplete until Frank goes back and get them. Also, if you actually see a unannounced or scoop survivors name on screen with their green life bar and leave the area without talking to them, their health will still slowly deplete as well.[8]

Jeff Meyer and Natalie Meyer die 30 game minutes (2.5 minutes real time) after Franks sees and hears Jeff or Natalie. Frank didn't even need to talk to Jeff or Natalie only hear them, for them to die when Frank goes to another load screen.

Simply hearing a survivor's cries for help can cause the survivor to beginning to die if Frank leaves to another load screen.

If a survivor's time limit bar on Frank's watch screen immediately changes from blue, yellow, or red to a small white block, this means that the survivor will die if Frank leaves to another load screen for too long (30 game minutes).

Entering Leisure Park during the unannounced scoop Prisoners is the same, even if Sophie is across the park, Frank will always hear Sophie scream, so if he goes inside and leaves her unattended, she will die in about 30 game minutes.

No call from Otis about the Shadow Of The North Plaza scoop at 11:05 pm

In another game, at 11:47 pm, only after Leah has been killed, does Otis call about Shadow Of The North Plaza.

Barricade Pair expires, Day 2, September 18, 4:00 am, as it expires Otis calls about Shadow Of The North Plaza

...Frank does not receive Otis's call for Shadow Of The North Plaza at 11:00 pm because he is in the security room.

When Frank travels down to the Warehouse he receives the Shadow Of The North Plaza call.

Awaiting call from Otis, Frank never responded to the call for A Mother's Lament

Even though Frank has not responded to Otis's A Mother's Lament call, Frank still does not receive the call for Shadow Of The North Plaza

the survivors will all get stuck at the ledge, trying to jump up all at once.

). Then jump down to the rooftop and push the survivors until they each jump up.[8]

If Frank hits a survivor enough, occasionally the purple message, "[Survivor name] has defected" will flash, and the survivor will attack Frank and no longer follow Frank to the security room and will not rejoin.[9] 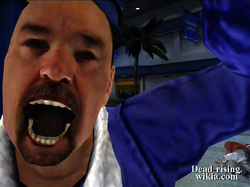 Survivor killed by a zombie can come back as a zombie. A death cutscene is shown, showing them being killed by the zombies. Here zombie Greg Simpson is biting Frank. Frank's notebook will also list the survivor as "undead".

Another death cutscene may involve the survivor committing suicide by pulling out a handgun they may not have previously had. For example, if Aaron Swoop is overrun by a zombie horde and killed, this cutscene is triggered.

If a survivor dies for any other reason, then the survivor will simply die, and be labeled as "dead" in Frank's Notebook.

Survivors, like zombies (but unlike Special Forces) can be effected by joke weapons like paint. But they are not effected by weapons which can make zombies slip and fall.

At 10:00pm, the moment when the lights go off in the mall, many of the survivors in the security room will sit down putting their heads between their legs. They don't actually go to sleep though, as their eyes are still open. All of the survivors simultaneously stand up at 5:00am. 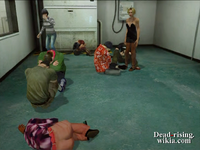 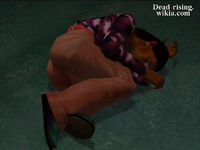 Michelle Feltz with her eyes open. 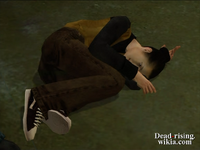 Jolie Wu with her eyes open.

Greg Simpson as a zombie, note the hunk of meat in his hand.