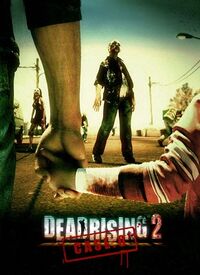 "Case Zero" is an Xbox 360-exclusive download that is available on the Xbox Live Marketplace. It takes place two years after the events of Dead Rising and three years before Dead Rising 2, intended to "bridge the gap" between the two games, acting as the demo for Dead Rising 2. The story involves Chuck's first large-scale adventure against the horde of zombies. It was released August 31, 2010 for 400 Microsoft points ($5). The game contains all the combinable weaponry in Dead Rising 2, and playing the Xbox Live exclusive will also level you up in Dead Rising 2 and offers some extra outfits. Head of Capcom research and Development Keiji Inafune said that it will take about three hours to rush through Case Zero.[1][2]

Inafune also stated: "I have always had doubts about doing a demo. Everyone seems to want to do them. Rather than create a demo for Dead Rising 2 I wanted to set up a different area and let people see what the game play is like."[3]

Between Dead Rising and Dead Rising 2, Chuck Greene, the hero of both sequels flees Vegas with his daughter Katey. In need of fuel and looking to stock up on supplies, Chuck and Katey stops at the small desert town of Still Creek. Shortly after their arrival a containment zone is breached, and the undead begin to shuffle into town. Then someone steals Chuck’s truck. With Katey needing a shot of Zombrex very soon, Chuck searches Still Creek for the drug and a way out of town. Chuck leaves Katey to find Zombrex.[4] [2]

After traveling through the small town, Chuck then discovers a road block with an overturned ambulance, which has Zombrex inside. Chuck also finds a motorbike which can be repaired. He takes the motorbike back to the gas station in a utility cart. Chuck examines the motorbike and determines that he will need five parts to repair the bike. Chuck finds the parts, and repairs the bike.

Immediately after giving his daughter Zombrex, he must fight a psychotic mechanic. As Chuck and his daughter begin to leave Still Creek, the military arrives. Chuck barely manages to escape town with his daughter.

As Chuck and his daughter are driving to Fortune City, they come upon the stolen truck and the thief dead in the driver's seat. Chuck collects their belongings and his motorcross jacket. He puts on the jacket then gets back on the motorbike, and they ride away.

Chuck Greene spends up to 14 hours (70 minutes real time), rescuing other survivors of the zombie outbreak, attempting to get Zombrex for his daughter Katey and finding a way to escape Still Creek before the military arrives.

Win Some Lose Some[6]

Handle With Care
Zombrex 1
Above The Law[7]

Notification of time until military arrives[]

After finishing Case 0-2: Find Zombrex, every time Chuck leaves the safe house, he will be reminded how much time until the military arrives.

There are six possible endings with four possible cut-scenes.[8]

Ending A shows Chuck and Katey successful in their escape from Still Creek after avoiding the military personnel ordering them to remain where they were or be shot for resisting. They later come across their stolen truck with the thief dead inside. Chuck retrieves their belongings, including the Zombrex and his signature yellow jacket before continuing to Fortune City. thumb|300px|right|All Endings to Case Zero

Endings B, C, D and E end in Katey being taken away from Chuck by the military personnel while others restrain Chuck and knock him unconscious.

Ending F has two short cut-scenes which are dependent upon where Chuck is when Katey is zombified.

If Chuck is outside the Brockett Gas Station safe house the cut scene:

If Chuck is inside the Brockett Gas Station safe house garage the cut scene:

Chuck drops to his knees, pounding his fist on the ground.

CBS News stated, "For a sequel to a four-year-old game, Dead Rising 2: Case Zero is surprisingly lacking in innovation. With the lack of either offline or online co-op, we also don't get a chance to try out Dead Rising 2's other major selling point as well, which diminishes Case Zero's overall re-playability value...And by the time Dead Rising 2 hits stores, you'll likely never play Case Zero again. The story is a bit of a throwaway in the grand scheme of things, so you won't be missing out if you choose to skip this one, but if you've been itching to get your hands on some third-person zombie action right now and can't wait for the full release, then Dead Rising 2: Case Zero is a great little slice of just exactly what you're looking for."[22]

In the Dead Rising 2 universe, there is a game called Dead Rising 2: Case Zero, during the zombie outbreak in Fortune City Left Hand Lance blogged on Tape it or Die:

"Oh, yeah, I also managed to jack myself an xbox and downloaded me some Dead rising 2 Case Zero, which is kind of a backstory for Chuck Greene (the dude what caused the outbreak). they pumped that one out pretty quickly. almost seems like an exploitation of chuck………a Chuxploitation, Lol! still, i’m not complaining. if there’s any way to relax after killing ome zombies in real life, it’s killing them in virtual life. LOL."[23]