Dead Rising 2 is a survival horror video game with action adventure and role-playing game elements. The game is the sequel to the 2006 video game Dead Rising. It is being developed, in partnership with Dead Rising developer Capcom, by Blue Castle Games and will be distributed by Capcom. The Original Dead Rising team members will return to create the game, including Keiji Inafune, head of Research & Development at Capcom. Originally set to be released in the beginning of 2010, the game's release has been pushed back to September 28th in North America and October 1st in Europe.[3][4]

The game is set 5 years after the events of the original Dead Rising. The zombie parasite that originated in Santa Cabeza and caused the Willamette outbreak has spread all over the United States. This is due to the 50 orphans scattered throughout the United States who had been injected with the parasite; subjecting them to zombification and infecting the rest of the US (This can be told through Overtime Mode upon achieving the A-Rank ending in Dead Rising 1). The game will take place in the fictional setting of Fortune City, which is modeled after the real-life city of Las Vegas, Nevada. Chuck Greene, a former national motocross champion, is somehow caught in the middle of the zombie apocalypse in Fortune City. Just like Frank West (the player-character from the original Dead Rising), Chuck will face a number of zombie hordes as well as surviving psychopaths, and surviving civilians whom he may choose to save. Among the survivors in Fortune City is Chuck's own daughter, Katey Greene, who was infected by her mother in the Vegas outbreak. Katey serves as Chuck's primary motivation for battling the undead. He tries to earn money to keep his daughter on the infection supressant "Zombrex" introduced in the original Dead Rising as the synthetic Frank West was using. Inafune mentioned in an interview that part of Chuck's quest will force him to participate in the violent game show, "Terror is Reality".[5]

The gameplay remains similar to Dead Rising with the player controlling protagonist Chuck Greene[6] as he fights off hordes of zombies while accomplishing specific missions. The game will include several new objects that can be used to attack the zombies.[7] The number of zombies which can be seen onscreen at any one time has also been dramatically increased from 800 in the original[8] to roughly 6,000.[9][10] According to Inafune, the new protagonist will be more "interesting" than the previous hero, Frank West.[11]

There will also be a greater variety of missions for the player to undertake, and the sequel will retain the original's time management mechanic.[11] However, the original game's photography mechanic will not be present in Dead Rising 2.[12] Instead, Dead rising 2 will feature a brand new mechanic that allows players to manufacture their own custom weapons at various points in the game. The player will also be able to purchase 'cards', that will reveal item combinations that could prove deadly after being built. Such combinations include:

It has been confirmed during Captivate '10 that cooperative gameplay in the story campaign will be available. An online cooperative mode will be available, but according to Blue Castle Games, there will be no offline co-op mode. Both players will play as the main character, Chuck Greene, and will be able to earn experience and keep the items they collected throughout the game, but only the host player will be able to save the game's progress. A host can invite a friend to join in the current game progress by sending out an invitation, if the friend accepts a confirmation icon will be displayed and the host can allow the player to join in. Non-host players can drop in/out of a co-op game anytime they want. When both players are separated in different directions, a tiny animated Chuck Greene icon will appear at the bottom of the game screen. The icon will show what the other player is up to, whether it be attacking or being assaulted by zombies. If a player is taken down by zombies, he/she will be able to call the other for help to revive them. The player will use food to revive the dying partner before his/her health bar runs out.[13]

Speaking at Captivate '09, Keiji Inafune confirmed that Dead Rising 2 will include multiplayer, but refused to state what the mode would entail. "We're at a point in game history that you need to have some form of multiplayer component in a game. Single-player alone is not going to cut it. So rest assured we are going to put multiplayer in the game, but I can’t go into specifics about what type of multiplayer as that directly relates to some of the game systems that we don’t want to talk about at this event. It will be online multiplayer, so keep that in mind."[14]

During the 2009 Tokyo Game Show, Capcom revealed that the multiplayer of Dead Rising 2 will take the form of a reality TV show called "Terror is Reality" in which players will act as contestants in a fictitious gameshow. Up to four players are available in multiplayer, where they compete against each other for the most kills inside an arena full of undead. Players will be able to use weapons and vehicles including human-sized hamster balls and chainsaw-equipped motorcycles. They also will be able to prevent other players from scoring by using various forms of "dirty" tactics.[Verification needed] The multiplayer mode has been compared to the television show American Gladiators.

Recently, Blue Castle Games and Capcom revealed that the game would feature a free roaming Co-op mode. However, little information has been released. This might be one of the causes of the game being delayed up to late 2010s.[15]

The sequel was announced on February 9, 2009,[7] confirming earlier rumors[17] of the game's existence, as well as a viral video for the game.[18] The developers Blue Castle Games worked with Keiji Inafune, the game's producer and Capcom's global head of research and development, along with other Dead Rising team members.[7]

The technology behind Dead Rising 2 was written from scratch by Blue Castle Games, with no code porting from the previous game.[19]

Capcom has created a variety of websites before the release of this game. These include TapeorDie.Com, visitfortunecity.com, and deadrising-2.com.

Capcom is set to sponsor a gathering of zombies at the London House of Parliament on August 30 - and the best dressed will win a games console. Attendees will also receive a limited edition, one-of-a-kind t-shirt. The inaugural General Election campaign will be attended by Citizens for Undead Rights and Equality (CURE), an equal rights group campaigning for the rights of zombies.[20]

There are several collectible retail copies.

The standard edition includes the game and a manual and will be available for the Xbox 360, PS3, and PC only.

The Zombrex Edition is only available for the Xbox 360 and PlayStation 3 consoles, and includes a fake syringe of the Zombrex medicine featured in the game plot, along with an accompanying safety information card, a Zombrex-labeled steelcase, a sales brochure, and a prescription pad. The Xbox 360 version comes with the Zombrex Dead Rising Sun movie whereas the PlayStation 3 version contains a voucher for a Dead Rising 2 XrossMediaBar dynamic theme and a behind the scenes featurette.[21][22]

The Outbreak Pack, available for any system, but exclusive to Europe, features a red box and contains a zombie figurine and some accessories for the figurine.[23][24] A limited run of 700 copies was also announced for Australia.[25]

Case Zero will be an Xbox 360-exclusive download. It will be available on the Xbox Live Marketplace priced at 400 Microsoft Points.[26] It will develop the plot in between the two main games and will act as the demo for Dead Rising 2. The story takes place three years before the events of Dead Rising 2 and involves Chuck and Katey's first large-scale adventure against the horde of zombies after escaping Las Vegas. The player can reach up to level five in Case Zero, after which the player may carry over his experience and cash earned into Dead Rising 2. The release date for Case Zero is set for August 31st, 2010 in North America and September 3rd in Europe.

Dead Rising 2 has been met with generally positive reviews. Both the Xbox 360 and Playstation 3 versions of the game received ratings of 80 by the review compiler Metacritic.[27] IGN, Eurogamer, and GamesRadar have given the game an 8 out of 10, praising the story, combat, and huge numbers of enemies on screen, while complaining about long loading times.

Platform Nation wrote, "What I love about Dead Rising 2 is that it feels more Smoother."[44]

In regards to the games difficulty, the Telegraph newspaper wrote, "I found myself having to restart the game a few times, and it was only when I hit level 20 that I could start to do all the missions comfortably, with plenty of time for the optional quests as well as the main story. For some perspective, I never had to restart the original game due to failing the story on my first playthrough, so if anything Dead Rising 2 is less forgiving, the time limits tighter, and the amount of objectives greater." [45] 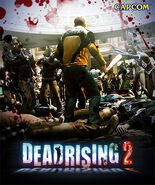