Dead Rising:Chop Till You Drop 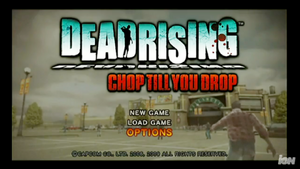 Dead Rising: Chop Till You Drop (known in Japan as Dead Rising: Zombie Sacrifice) is an action-adventure video game with role-playing game elements. The game is a remake of Dead Rising from the ground up for the Wii console.[4] The game was first released on February 19, 2009 in Japan, and later that month in other countries.

Frank West, a photojournalist, journeys to the fictional town of Willamette, Colorado. There, he encounters hordes of zombies and crazed survivors as he attempts to uncover the reason behind the zombie infection.

In Chop Till You Drop, the player character, Frank, is sent on missions by fellow survivors Otis, Brad, and Jessie. The mall's security room serves as the group's base of operations and is where the missions are engaged. The missions take the player through the main plot and have them rescue the various survivors. Though at times the player is permitted to roam the mall freely without penalty, they are not permitted to do so during a mission. The effect of the missions is to provide a more structured game play experience, a significant change from Dead Rising.

In addition, the camera and photography element has been entirely removed. Books are now purchased from Cletus instead of found in the mall. Also, there are fewer items scattered around the mall that can be used as weapons.

New to the game is a completely redefined firearms element. The player may shoot guns with an over-the-shoulder view where the gun can be aimed with the Wii Remote. The amount of ammunition in the game has been increased to provide more gun-based gameplay.

There have been several changes to the game from original the Xbox 360 version. The main differences between the two iterations are:

Due to the Wii not having the same level of graphical capabilities as the Xbox 360, fewer zombies can appear on screen (800 zombies could be on screen in the Xbox 360 version at once, but now have to be limited to 100),[7] but Capcom had attempted to retain as many of the Xbox 360 features as possible.[8] Most of the melee weapons are kept in the Wii version, however there is an increased emphasis placed on using guns to kill zombies.

On July 15, 2008, Famitsu magazine revealed that Dead Rising was being ported to the Wii console to be released on February 24, 2009; the port name was later revealed to be Dead Rising: Chop Till You Drop (Dead Rising: Zombie no Ikenie in Japan).[9] Capcom decided to port over the game after the Wii port of Resident Evil 4 was critically and commercially well-received. The game runs on the Resident Evil 4 engine.[Verification needed]

The game is published by THQ in Australia.[10] Capcom announced that they expect to sell 500,000 copies of the Wii version.[11]

Chop Till You Drop has received mixed reviews and has an aggregate score of 61/100 on Metacritic. X-Play gave the game 2 out of 5 stars, saying that there were not enough zombies, and some enemies are extremely annoying, as well as criticizing some poor control choices, the removal of the photo-taking system, and the lame assortment of minigames. They did praise the Wii Remote aiming for ranged weapons, calling it a vast improvement on the aiming in the Xbox 360 version.

IGN gave the game a 6.9/10, and criticized the graphics saying: "Obviously, Dead Rising had to take a hit in the transition from 360 to Wii. But this isn't even good looking for the Wii, really." and also said: "The story and dialogue are wretched, and a key feature (the ability to take photographs) has been inexplicably removed." GameSpot gave the game a 6.5/10, praising the gunplay saying it's "easy but satisfying" and "Same zombie-bashing fun as the original", but criticized the fetch missions saying they "get old quickly".