The next case is in Seon's Food & Stuff, in the northwest corner of the North Plaza. Return to Paradise Plaza, recharge on Frank's camera battery and stock up on food and weapons, then take the shortcut to Wonderland Plaza before passing through to the western end of Wonderland Plaza and head north to Seon's.

If Frank didn't open the shortcut earlier, Frank will have to go through the Leisure Park, avoiding the convicts, and then entering the eastern end of North Plaza and making his way through the undead hordes until reaching Seon's.

If Frank does not have the small chainsaw, before entering Seon's, go to next door Ripper's Blades to pick up a couple of katanas.

Inside the store Frank should maximize his health and stock up on food - the best items are orange juice and milk along the back wall, the very best is wine (5 health) on the far left side.

Head to the pharmacy door in the rear left corner of the store, between the seafood and meat counters. A cutscene begins.[1]

thumb|300px|right|Cutscene 24 - Steven at the Supermarket

The crazed manager of Seon's, Steven has a modified cart with Isabela Keyes unconscious inside. She is the woman Frank saw in the Entrance Plaza cutscene just before the undead hordes swarmed in.

As soon as the cutscene ends, jump up on the aisle shelf to avoid Steven's cart.[3]

Steven's main attacks are his:

Steven also has a shotgun for when Frank is out of range. But fortunately, the store has plenty of cover with aisle shelves, as well as plenty of food to replenish health. Don't give Steven the opportunity to shot the shotgun by lingering too long on top of the shelves. Drop into the opposite isle and make Steven move toward the checkout counters. The checkout counters offer Frank his best chance at survival. The counters act as a barrier between Frank and Steven, allowing Frank to shoot Steven safely from the other side. Steven will just continue to try and ram Frank with the cart.[3]

Steven's shopping cart is very slow to turn, so start off by running down the aisle away from him, then duck to one side and stand a couple of aisles over with Frank's guns out, waiting for him to come out. Fire a few shots and then duck back down another aisle then repeat. If Steven's cart is getting too close, Frank can also hop up onto the shelves and into an adjacent aisle; while it might be tempting to stay up there, Steven will just resort to his shotgun.

It is possible to get behind Steven to use melee weapons, either by outrunning him or using the shelves (he can't turn around once he's down an aisle) but it's really not recommended as your first course of action unless Frank has a couple of katanas or the small chainsaw. Steven can be defeated with two or three quick swipes with the Small Chainsaw.[4]

If Frank didn't bring a decent weapon into the grocery store, try to use the drink cans on the far aisle next to the bread. These cans work surprisingly well at damaging Steven if Frank hits him with several cans in a row.[4]

Isabela disappears after the cutscene. Frank receives the pharmacy key from Steven's corpse. He can now open the pharmacy door.[3] Like all psychopaths with unique weapons, Steven leaves the weapon cart for Frank. This weapon will now respawn every time Frank leaves the store and returns.[4]

Enter the doorway between the meat and seafood counters in the back. Follow the corridor all the way along.

The pharamacy key is automatically used when 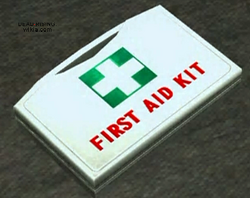 Go into the pharmacy and pick up the medical kit, which Frank needs to bring back to the Security Room. Exit the supermarket.[3]

Frank can try to complete the Lovers scoop in Wonderland Plaza on his way back to the security room if there is time, but watch the clock. The "Lovers" scoop will end at the same time that Case 2-3: Medicine Run ends.[4]

Give Jessie the medicine in the Security Room[] 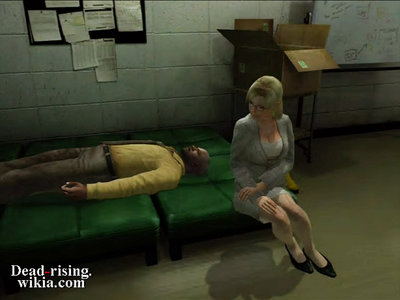 Speak to Jessie in the Security Room to hand over the medicine. There is no end cutscene for this case.

Continue to the next article in the walk through, Case 3-1: Professor's Past.

Table of Contents
Community content is available under CC-BY-SA unless otherwise noted.
Advertisement