For the Dead Rising case, see Case 2-2: Rescue The Professor.

Chuck arrives just as Tyrone King is exiting a train. Tyrone orders his three mercenaries to take care of Chuck and closes a metal gate. After Chuck defeats the three mercenaries, he throws a fourth mercenary off his bike. The bike breaks through the gate.

Chuck retrieves the bike and chases after Tyrone's train. Chuck takes a ramp and jumps onto the train. He battles several more mercenaries.

At the head of the train Chuck confronts Tyrone. Tyrone admits to framing Chuck. He then unlatches the engine from the rest of the train, and beginnings shooting at Chuck.

The unlatched wagons comes to a stop and Stacey calls, asking Chuck's status. He explains that Tyrone framed him. Stacey responds that his concern should be Katey's daily Zombrex dose.

Chuck finds a key on the ground next to the train wagon. 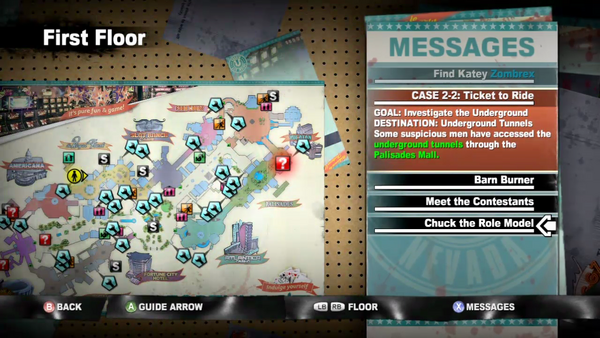 Travel to the underground[]

Cutscene: Jumping on the train[]