See also Scoops Day 1 Part 1 for a walk-through of this scoop and four others on day one.

Burt immediately starts to attack Frank. Frank will need to hit Burt a few times to get him and Aaron to join Frank, with a weapon that is not too powerful. When Burt says "Dammit! Just what I needed! Another crazy person harassing me!" and the yellow talk Action Icons appears, Frank can then talk to Burt, convincing him that Frank is bringing them to safety, and lead him back to the Security Room. Aaron will automatically join Frank when Burt does.

Give Burt some of the health in the back and make sure both Burt and Aaron have a weapon. Note that when you give a survivor food, they drop the weapon and Frank needs to pick it up and give it to them again. 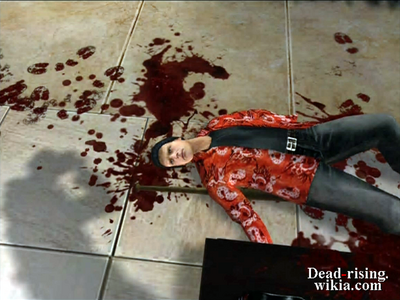 If they are not rescued or are abandoned, once activated, all survivors progressively lose health until they die, usually around 35 game minutes after Frank leaves them and goes to another load screen area.

Frank can wait to long to rescue Burt and Aaron, after Burt was activated (usually by walking to close to Weber's Garments) and Burt can have so little health, there is no way to beat Burt into joining Frank without killing Burt. Aaron will still join though.

After leaving the plaza and returning, the barricade has returned, and Burt still wants to kill Frank.

A game hour after (5 minutes real time) Otis calls Frank about Barricade Pair, Otis will call Frank about A Mother's Lament scoop, which is across the walkway in the Riverfield Jewelry store where Frank will find Leah Stein. For any significant distance back to the security room, Frank will have to carry Leah on his back, so have Frank give Aaron and Burt a weapon so they can defend themselves.

During this scoop there are some additional food and weapons in the store which do not appear again.

The following weapons are barricading the door:

The following are in the back corner of the store near Aaron Swoop: